“Sometimes the simple rules are the most successful” – C. Vincent Byrne

Back when Byrne celebrated sixty years in business, former President C. Vincent Byrne—or “Vin,” as he was called—reflected on some of the most memorable moments from the brand’s six decades in Central New York:

“Do you tell about the runaway horses, the horse that was unhitched and sold in front of a saloon, or the truck full of milk that ended up on its roof?” (All true stories)

“Do you tell about the war years, when you couldn’t buy tires or replace trucks, nor sell any butter or cream as everything went to the war effort?”

There have been many incredible stories in our ninety years, but Vin knew why Byrne remained successful: because “all of our employees are dedicated to doing their very best.” And while much has changed, the fact that we owe our continued success to our employees has not. In fact, when it was announced that Byrne Dewitt was named the 2022 Dairy Plant of the Year by Dairy Foods Magazine, Carl Byrne (Vin’s son and our current president) said, “We owe our continued success to our longtime customers—many who have been with us for decades— and our dedicated employees. Our team continues to go above and beyond to produce a quality product, and we want to extend our gratitude for their commitment and teamwork—this award is for them.” 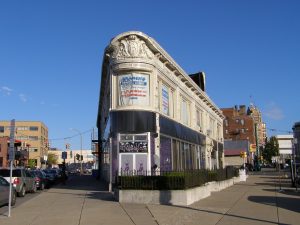 Back in 1933—during the Great Depression—Matthew V. Byrne, a native of Syracuse, began bottling and delivering high-quality milk to Central New York families. It wasn’t a great time to launch a brand-new business, but Matt brought a great deal of experience gained during his time in the tire industry as a sales representative for Miller Rubber Company. The first Byrne Dairy plant was in what’s known as the “Byrne Square Building.” Built in 1920, the building still stands at 308 West Genesee Street in the Clinton Square neighborhood. And the building isn’t square at all. It’s a triangular shape and is one of Syracuse’s few “gridiron” structures. In June 1921 (a year after Matt built the building), an ad in the Herald newspaper indicated that the first floor of the structure would house “one of the finest service stations in the city of Syracuse” and would offer Miller Tires. The second floor was leased by Syracuse Grocers, Inc.

When the stock market crashed in 1929, the entire country faced extreme economic hardship. Despite the odds stacked against him, Matt was determined to forge ahead and build a successful business.

Matt pivoted to the dairy industry in 1933, and the first floor of the Byrne Square building became a milk processing and bottling operation. Folks would stand outside on the sidewalk and peek in the large, plate glass windows. The first milk bottled by Byrne was Guernsey milk—high in butterfat with a rich, golden color. At the time, butterfat was said to be one of the most valuable ingredients in milk, and Byrne’s high-quality product became the foundation for the Byrne Dairy line of products.

When Byrne began bottling milk, it sold for five cents. Home delivery by horse and wagon began in 1937, with stops at grocery stores, schools, and nursing homes. This delivery method continued for nearly 20 years—the brown and yellow wagons were a familiar and comforting sight on city streets, and many people in the neighborhood knew the horses by name. There were eight horses pulling wagons along milk routes, and Byrne Dairy milkmen became like family to the folks they delivered to. Home deliveries took place in the early hours of the morning, and many young men became a “milkman’s helper,” carrying milk from the wagon to the doorstep milk box.

In 1940, motor trucks were introduced to many of Byrne’s home delivery routes. By the end of the decade, trucks replaced horse and wagon delivery teams. In 1952, Molly, a ten-year old strawberry roan, officially retired as the last horse to pull a Byrne Dairy wagon through the city of Syracuse.

The year 1946 was significant for several reasons: for one thing, the war had ended, and thousands of U.S. troops returned home. The “Baby Boom” began, despite ongoing shortages of food and other materials. The first bikini was sold in Paris. Tupperware was introduced to consumers in department and hardware stores. And Byrne Dairy moved bottling operations from West Genesee Street to a larger facility on Oneida Street. That same year, Matt Byrne handed over the business to three of his sons: Jack was named president, Bill, vice president, and Vin was appointed secretary. Both Vin and Bill were intercollegiate boxing champs at Syracuse University before joining the Army. Jack was also an athlete, winning an intercollegiate skating championship while attending Holy Cross College.

In 1956, folks in Central New York began humming a new tune: “Byrne Dairy Milk is Mighty fine.” The slogan became a familiar sight on milk bottles and other Byrne packaging.

“I didn’t go to finishing school, I didn’t have to learn to love that creamy, wholesome milk, the milk you get from Byrne. You ain’t needen no degree, to taste the difference, no sir-ree. Byrne Dairy milk is mighty fine, chuck plum full of vitamine, a wealth of health in every drop, good for the kids n’ mom and pop. Give Byrne milk the one-week test, you’ll find out why Byrne milk’s the best. Just one week and you will learn why people switch to Byrne!” 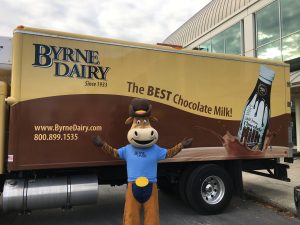 The goal of the new “Byrne Dairy Jingle” was to reach a younger demographic of consumers. “Byrnesie,” the beloved Byrne mascot, was introduced along with the catchy song.

In 1957, the first bulk milk tanker was purchased to pick milk up at the farms and transport it to the Oneida Street plant. Home deliveries continued by truck until 1970.

The Times, they are a Changin’

In 1978, the brand underwent a significant expansion when it developed its own line of ice cream. The former Sears Automotive Center, located about a mile from the Oneida Street milk plant, was converted to Byrne’s ice cream production facility. Utilizing the high-quality cream available at the dairy, Byrne began producing premium ice cream and selling it at its retail locations and local grocers.

Byrne’s “Mighty Fine” line debuted first and is still available today. To acknowledge consumer desire for more natural food products, Byrne also launched its “All-Natural” line. The packaging became a familiar sight in Central New York with its cross-stitch patterned square and round containers. It was safe to say that almost every family in the area had at least one container in their freezer! The third phase of Byrne’s foray into ice cream production came with the launch of its “Homemade by Byrne” line. The product featured all-natural ingredients, higher butterfat, and less air than regular ice cream—like the ice cream that folks would make at home many years ago.

While the brand quickly became known for its delicious ice cream, the milk business was still a great success. In 1980, the Oneida Street plant underwent an extensive expansion that increased the company’s production capabilities by 25%. Byrne began to manufacture its own plastic bottles in the newly modernized facility. Ten years later, a new 32,000 sq. ft. cooler was added.

NEXT: Part II of the Byrne Story…next week on the blog!